Periodontics deals with the prevention and treatment of periodontal pathologies. To include periodontal tissues and organs, which are placed around the tooth – gums, bone tissue, which is the root of the tooth and the tooth ligaments. Gingvit, periodontitis and other inflammatory gum disease is usually accompanied by pain, bad breath, loosening of teeth, bleeding gums. Today, periodontal diseases affect 90% of the population, so the treatment of gum disease in dentistry paid a lot of attention.

Gingivitis -. The initial stage of gum disease, caused by the adverse effects of general and local factors and often accompanied by bleeding and redness without compromising the integrity of the periodontal connection

Dentists advise in the initial stage of gingivitis within a week rinse your mouth with a solution of chlorhexidine to reduce inflammation and, if process spread deeply, the treatment will have to be carried out in the dentist’s office.

Periodontitis – as a consequence of delays in the treatment of gingivitis. When periodontitis is inflammation of the tissues surrounding the teeth, periodontal pockets appear and perhaps even loosening and loss of teeth. 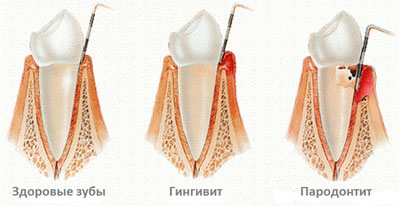 According to the severity of periodontal disease is divided into 3 degrees:. Mild, moderate and severe:

When mild periodontitis patient has halitosis, itching in the gums and the appearance of periodontal pockets.

In moderate appear severe pain in the affected teeth and gums between the teeth and gum pockets deepen and there are already pockets of the bone.

The first thing in periodontitis be treated periodontal pockets, clearing them from the dead tissue and bacteria. It also involves removal of tartar and thorough sanitation of the oral cavity, and then prescribe a gargle for disinfecting the mouth and strengthen the gums.

The device “Vector” – a special ultrasound device, which effectively removes the inflammation in the small previously accessible locations, and creates conditions for the strengthening of the tooth in the gums. Using ultrasonic vibrations generated zone in which pathogenic bacteria are killed, and the smallest particles polish the surface of the cleaning powder root. Pockets extensively washed with water, greatly reduced the number of microorganisms in them. this device is really indispensable for the treatment of periodontal and gingvita.

Symptoms of periodontal disease: the absence of inflammation and pocket. denudation of the necks of the teeth, and then the roots of the teeth; reducing the height of the interdental partitions; diseases of the cardiovascular system, endocrine, metabolic disorders.

For yet effective methods of treating periodontal disease does not yet exist, doctors usually try to reduce the increased sensitivity of the teeth and strengthen teeth by means of splinting. Fortunately, this disease is quite rare and occurs in only 2-3% of people.

Treatment of gingivitis and periodontitis

Important in the treatment of gingivitis and periodontitis – carefully monitor oral hygiene, as well as the use of dental floss and rinses different. Without this measure, any treatment will be ineffective and will not give the results.

If you notice the first signs of inflammation or bleeding gums can take action on their own, often bleeding gums simply by weakening immunity or any stress. In such a case, it may help to use a variety of toothpastes and balsams-conditioners to strengthen the gums. However, dentists still recommend in such cases to consult specialists.

Treatment of periodontal disease in our clinic

To date, treatment of such diseases is possible. First of all it is important to remove the causes of the disease, about which we wrote above, to eliminate the source of infection
Doctor – Periodontist conducts a thorough diagnosis of periodontal

Next we come to the important stages of treatment. Depending on the severity of the disease and the condition of periodontal doctor periodontist determines the method of treatment.

Methods of treatment of periodontal disease in the clinic «New Dent»